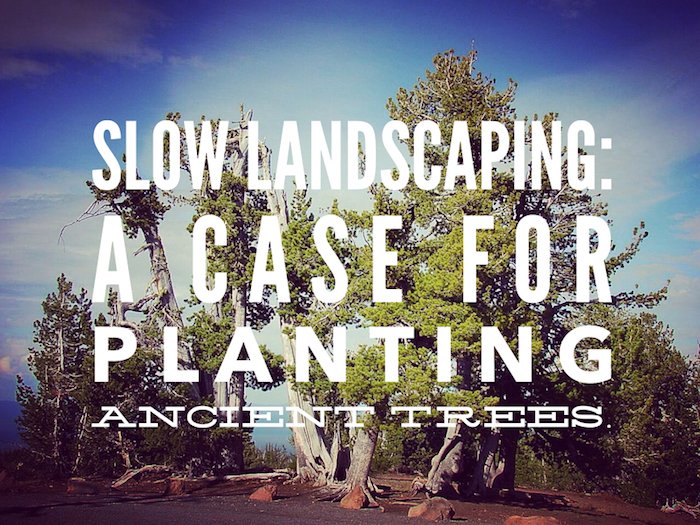 What better way to slow to slow things down than to seed cities with beings capable of living centuries or millennia? In what ways might a walk beneath ancient giants and twisted ancestors place us in a bigger here? A longer now?

Artist and musician Brian Eno once said that he wants to live in a “big here” and a “long now.” How long is your now? That is to say – what’s the timeframe in which you view our day to day? What timescale informs your decisions? Days? Months? Centuries?

In 01996, the LongNow Foundation (named by Eno) formed to “provide a counterpoint to today’s accelerating culture and [to] help make long-term thinking more common.” They define they now – the longnow – as the last 10 000 years and the next 10 000 years.

How differently would we act if we lived in a longer now? In what ways would our decisions change and in what ways might out priorities shift?

The point of slow landscaping is to provide continuity in a fast-paced environment – to provide pause and contemplation – to remind us that we are the result of circumstances that extends way before (and after) us – that we’re living in the LongNow. Slow landscaping asks us to act in ways – and is an act in and of itself – that leaves future generations with more options than we inherited.

Living longer than most buildings, slow landscapes would dictate the shape of the built environment – as opposed to the other way around. Cities and buildings would bend and shift to fit slow landscapes like geological features. Each tree would shape the fabric of the spaces it occupies. Poor architects and planners will hate them, but good ones will incorporate them into their designs.

There are many long-living species to choose from – a quick google search yields a list of the world’s oldest individual trees – many of which are slow growing conifers living in high alpine environments. I’ve selected a handful suitable for growing in my local (Edmonton) environment. I encourage you to see what will grow where you live.

One of three bristlecone pine species, P. aristata, can be found at local nurseries here in Edmonton and is a small to medium-sized tree (20 feet tall and 25 feet wide) native to the Blackhills of Colorado.

Koren Pinenut is a slow-growing giant that produces edible nuts. Reportedly hardy to USDA zone 3, the Korean Pinenut is native to parts of Korea, Manchuria, Eastern Russia, and Japan. The tree can reportedly reach 100 feet, though, 30 to 50 feet is more typical for trees under cultivation. Plant one now and you’ll be harvesting pine nuts in 15 to 45 years – expect a yield of 10 to 20 pounds per tree. Bring a ladder.

Native to the high elevations of Alberta’s mountains, the whitebark pine is a long living Alberta tree with significant ecological value for wildlife (having coevolved with local nuthatches who bury and inadvertently propagate seeds. Like the Korean Pinenut, the seeds are edible, though, smaller.

The Whitebark pine is slow growing and can take on various forms depending on the harshness of its location. At high elevations, it sometimes grows as a multi-stemmed shrub but has the potential to get as large as 70 feet tall and 45 feet wide in more favorable conditions. The oldest recorded tree is 1200 years old.

The Whitebark Pine is currently a species under threat due to white pine blister rust, mountain pine beetle, and the ill effects of fire suppression. The most comprehensive sources of information on Whitebark pine that I could find is an Alberta Conservation Association report from 2007 and a profile on conifers.org.

A native Alberta tree found at high altitudes in the Rocky Mountains. Alpine Larch can grow anywhere from 30 to 80 feet tall depending on elevation – growing shorter at higher elevations. Soft green needles turn golden and fall off each year.

The oldest Alpine Larch is in Kananaskis and reported to be over 1900 years old. More information at conifers.org.

The trembling or quaking aspen grows locally in Alberta is has the potential to live for tens of thousands of years due to its massive underground root system that perpetually sends up new trunks. Though individual trunks – that present as individual trees – are short-lived, the plant as a whole can grow to be ancient.

The oldest know trembling aspen is named Pando growing in Utah’s Fishlake National Forest. Pando is a single male aspen tree estimated to be over 80 000 years old. Pando covers a staggering 106 acres, has over 4000 trunks, and has a mass around 6 600 metric tonnes.